In a 60-plus-year career in drag racing, nitro legend Jim Dunn has had a lot of drivers in his car, but none have lasted as long or come from virtually nowhere as his current shoe, Jim Campbell, who is just finishing his seventh season with Jim Dunn Racing. 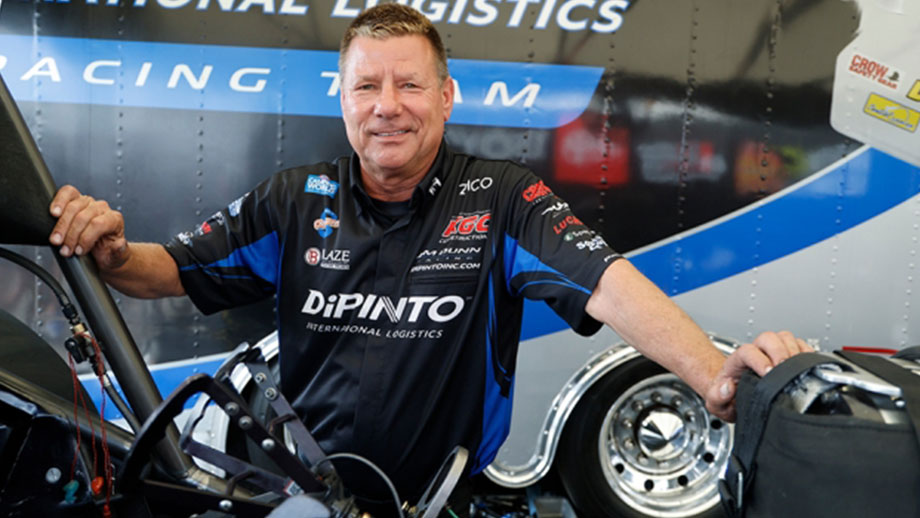 In a 60-plus-year career in drag racing, nitro legend Jim Dunn has had a lot of drivers in his car, starting, of course, with himself, for decades, as well as his son, Mike, Al Hofmann, Kenji Okazaki, Tony Bartone, Frank Pedregon, Jerry Toliver, Paul Lee, Todd Lesenko, John Hale, and Jeff Arend, but none have lasted as long or come from virtually nowhere as his current shoe, Jim Campbell, who is just finishing his seventh season with Jim Dunn Racing.

Campbell was on no one’s radar to drive for the legend, as he had very little seat time in a nitro Funny Car. His first brush with drag racing came on the safety squad at local dragstrips but he made his way onto the track at the wheel of one of Frank Hawley’s drag racing school cars, which is still light years away from driving a nitro Funny Car.

“I’ve always been a fan of drag racing, ever since I was six years old,” he recalled. “I was born and raised in Phoenix, so Beeline Dragway was my hometrack. My dad would take me out and I remember watching guys like Jim Dunn and Don Prudhomme race. Driving a Funny Car was always a dream, a bucket list kind of thing.

“Through [Hawley’s] school, I got to be really good friends with Jack Beckman, and I told him I thought I could drive a Funny Car, and he kind of laughed at me. In 2015, my mom wasn’t doing well [healthwise] and I little bummed out, and I thought, ‘I’ve gotta cheer myself up. I’ve got to do something. It’s always been a bucket list/bet.

“Jack said, ‘Listen, I’ll hook you up,’ and I ended up driving a Funny Car — the alcohol shift car — at Frank Hawley’s school and made about 10 passes. Chad Green was also there at the time and we both wanted to become a pro. I got the thumbs up from Frank and Jack Beckman and they hooked me up with Del and Chuck Worsham and we went out to Bakersfield in the summer of 2015 to get my license and I got licensed on my first three runs at a nitro car.”

Campbell was able to self-fund his tuition through his company, California Safety & Fire Specialists, which provides training for OSHA, federal classes, CPR, first aid, and other skills, and had enough money to actually make it into competition. 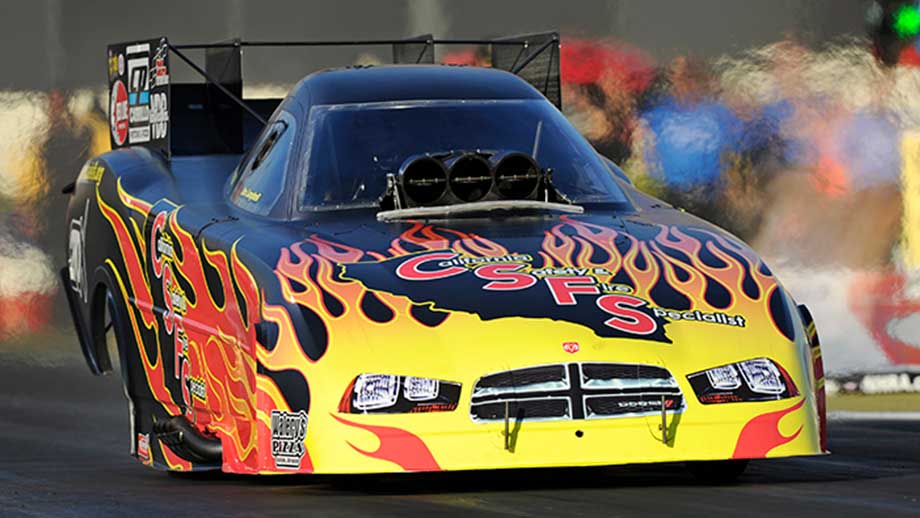 “We went to Indy for the U.S. Nationals and ran our first three-second runs — a few of them went – and I got addicted to it. I knew the Dunns, and I would always come over and talk to them because John Hale, their driver at the time, was a friend of mine. They’re just wonderful people and I later got a phone call from them saying that John was going to be retiring and they were looking for a replacement, and I was one of the guys they were looking at. I didn’t think in a million years I would get it, but about two hours later, I got a call back and said ‘We’d like you to drive for us.’

“I was stunned to be sitting with the legend Jim Dunn. I’d watched Funny Car Summer — I think we all did — and I thought how cool is it that I get to drive for Jim Dunn, a legend, and coming from absolutely no background all the way into the fuel categories.”

“My first race with the Dunns was the 2016 Winternationals, and I remember running Alexis DeJoria in the first round. She beat me but we ran a 4.04. When we got out at the top end, Alexis goes, ‘Nice run. Who are you?’ It was really cool, and I’ve been here ever since.”

Jim Dunn is as old school as old school gets, and notorious for his desire for precision and competence, and you have to have a thick skin to drive for him, a fact that Campbell probably knows as well as anyone. 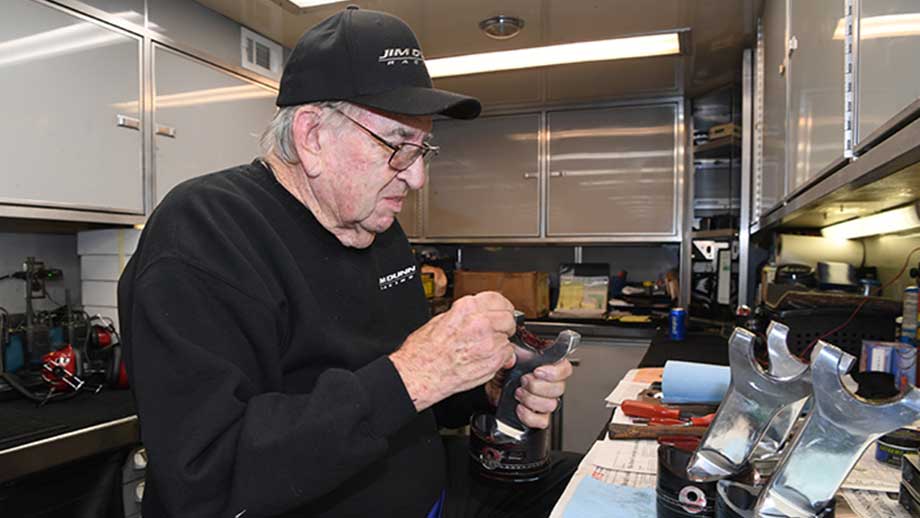 “For whatever reason, Jim and Diane seem to like me,” he said. “They’re just awesome people and I know they’ve gone through a lot of drivers, but we just hit it off. Sure, I take my lumps. I admit when I’m wrong, and I get told when I’m wrong, so it’s just been a great learning experience.

“Jim is really cool, and he jumps on me when I do stuff wrong. He shows me on the computer. We’re all guilty every once in a while of squeezing the throttle because you want to cut a good light and he doesn’t like that. Jim Dunn is known for wanting to do short burnouts. So I do what the boss says. If I don’t yelled at a couple of times a weekend, I didn’t do my job.” 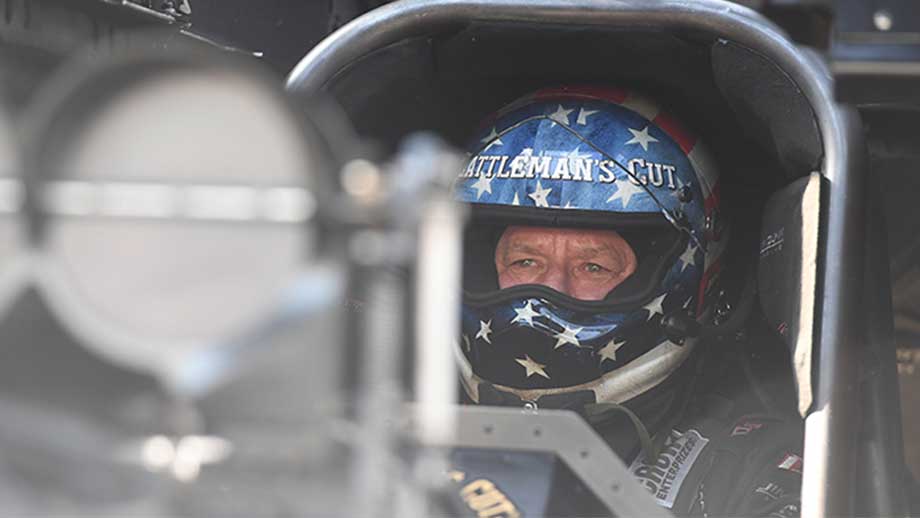 I asked Campbell to give me a top-five list of Dunn warnings, advice, admonishments, and instructions:

“No. 1 is ‘Focus, focus, focus.’ That’s always what he always tells me. Once you get inside the car, and you’ve got the butterflies and you’ve got everything going on, it doesn’t take very much to get distracted. Jim Dunn was a leaver in his day. I mean, he left on probably 70% of the people. I get left on 70% of the time. So I’d like to flip that around. My lights have been getting better, the car’s been getting better. So, as a team, Jim Dunn Racing is just getting better.

“No. 2 is ‘Don’t squeeze my goddamn throttle.’ When you set your foot on the throttle after you stage, every once in a while you just want to cut a good light, so you squeeze the throttle a little bit, but that starts all the timers in the fuel system. ‘Make sure you go straight down,” he says. ‘I want to see that line goes straight down.’ 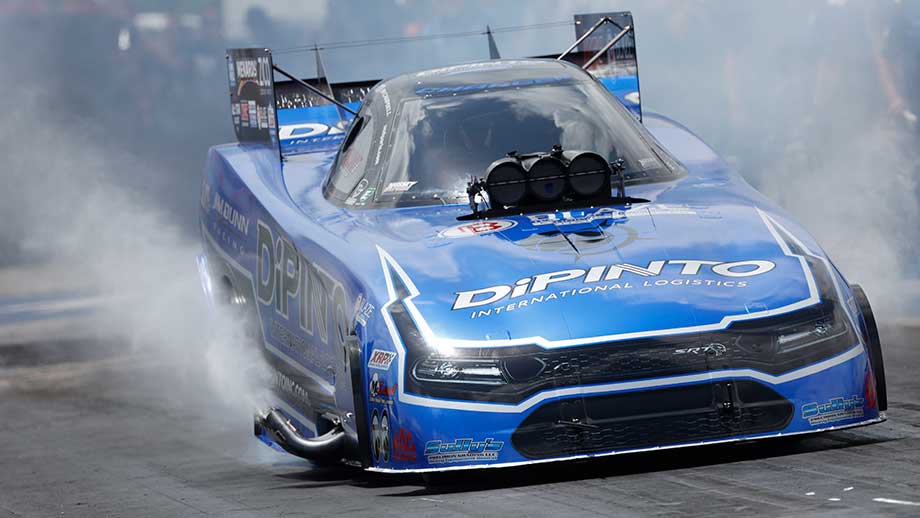 “No. 3 is ‘Don’t do a long burnout and get my clutch hot.’ We’ll leave the expletives out. Jim likes to short burnout because he says it doesn’t get to get the clutch hot. Every once in a while I’ll do a little bit longer burnout and with computers now, there’s no lying about it because he can look at it on the computer.

“No. 4 would him yelling at me asking about why I shut the car off. Sometimes the car does something and maybe it didn’t do anything, but I perceived that it did, so I shut it off. He will scream at me, ‘Damnit you were on a good run,’ but then he’ll tell he’d rather me lift and save the car, so maybe that’s an attaboy at the same time. It’s really a fine line on that stuff.

“Del Worsham, Frank Hawley, Jim Dunn — all of my mentors — have taught me one really, really important thing: Not only does the throttle go down, but it comes up, and every driver makes that decision of when they’re going to lift. I pride myself on not going across the centerline or hitting the wall. I’d rather save it and admit that I got it out of the groove or whatever happened. And that also makes the person in the other lane next to you know that you know what you’re doing because I don’t want to be next to somebody who doesn’t have a clue. 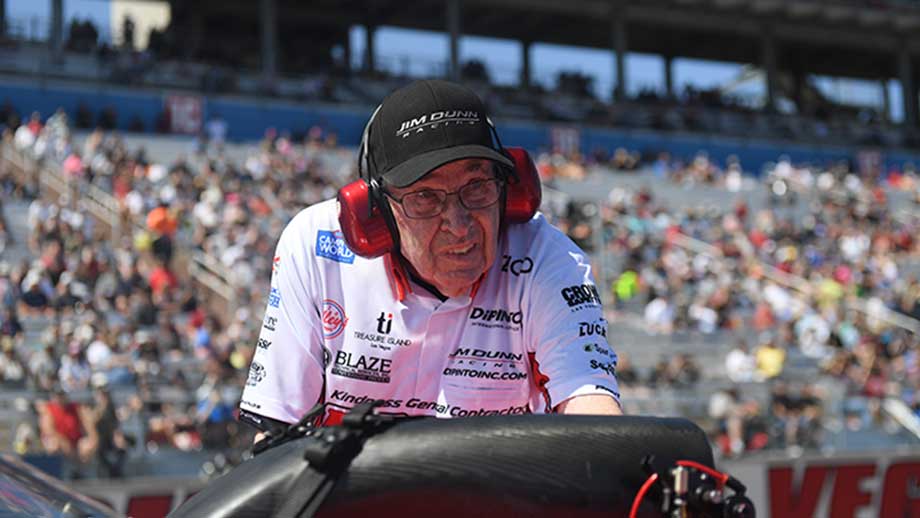 “The fifth Jim Dunn saying is ‘We’ll do better next week.’ He’s just a great guy. Can he be grumpy and gruff? Absolutely. Do I get screamed at? Sure. But you know, it’s seldom undeserved.

“He gets frustrated. He wants to win. Some people think that we just come out here to qualify. We don’t always have the big budget that everybody else does, but we’re here every race, we make a lot of runs, and the car goes down the track most of the time. We’ve realized that A to B passes win races. This year, I’ve had a good car, but we just seem to get a better car in the other lane. It really is a right place, right time sport.”

Although Dunn has won plenty of national events both as a driver and an owner, Campbell is still waiting for his first shot at a Wally, for his first final-round appearance.

“My career highlight so far was definitely last year at the Winter/Summernationals in Pomona. It was brutally hot and we almost went to the finals because [in the semifinals] J.R. Todd dropped a hole but we also dropped a hole. It was still a really, really special hometown and it was with the Mooneyes car, which made it even more special.

“I also want to give a lot of credit to Jon [Dunn]. He does such a great job on the marketing, and all of our cars look beautiful.” 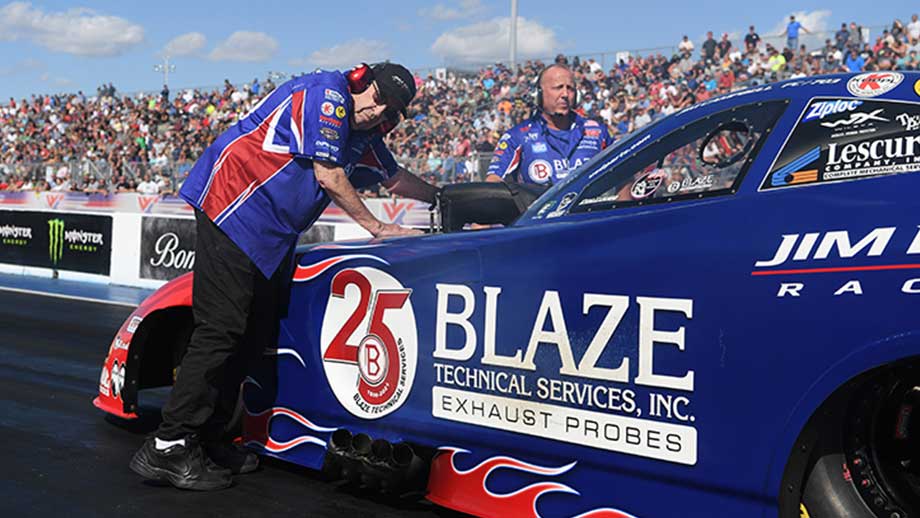 “For me, this whole thing is just an overall dream come true. I love the people around here and now I’m addicted to I can’t picture myself doing anything else. When I first got hired with Jim, I told him, ‘I want to be the last driver that ever drives for you.’ I feel like we have a bond that and we get along. We have our moments. Don’t get me wrong. And if Jim does yell at me, I just sit there and take it. I listen and I learn from it.

“He’s got more knowledge in his fingernails than I’ll ever have in my brain. So I just listen to what he says and do what he says. And it works for us.”