Blaze Technical Services will be flying its popular nostalgia flame pattern on the Jim Dunn Racing Funny Car at this year’s NHRA national event in Norwalk.

Blaze Technical Services will be flying its popular nostalgia flame pattern on the Jim Dunn Racing Funny Car at this year’s NHRA national event in Norwalk. The black background, highlighted by purple, blue, and green scalloped flames, is a retro look befitting Jim Dunn’s legendary role in drag racing for the past 60 years.

Blaze, of nearby Stow, Ohio, has been producing temperature sensors since 1996. In 2002, they entered the NHRA market with their first team sponsorship. Since that time, Blaze has continued to improve its exhaust probes with faster response times, rugged durability, and better pricing. Additionally, Blaze has offered new products, such as a clutch probe, and more recently its black series, which eliminates electrical interference. Blaze is committed to its relationship with NHRA and its teams.

Jim Dunn Racing has been enjoying the 2022 season thanks to quick times and a consistent Funny Car. Driver Jim Campbell recently set a career elapsed time record, and the team has been qualifying well. Dunn was also recently honored during an event at the Lions Automobilia Foundation and Museum in dedication drag racing’s roots in Southern California.

A spokesperson for Blaze noted ahead of the Norwalk race, “Jim Dunn Racing is the essence of NHRA: fun, family and racing. Jim and Diane Dunn along with Jon Dunn embrace their crew, sponsors, and fans as part of their family. Blaze has been represented by Johnna Dunn as the face of Blaze Technical Services at the track, and Blaze is grateful to have the opportunity to sponsor a quality team and a quality family.” 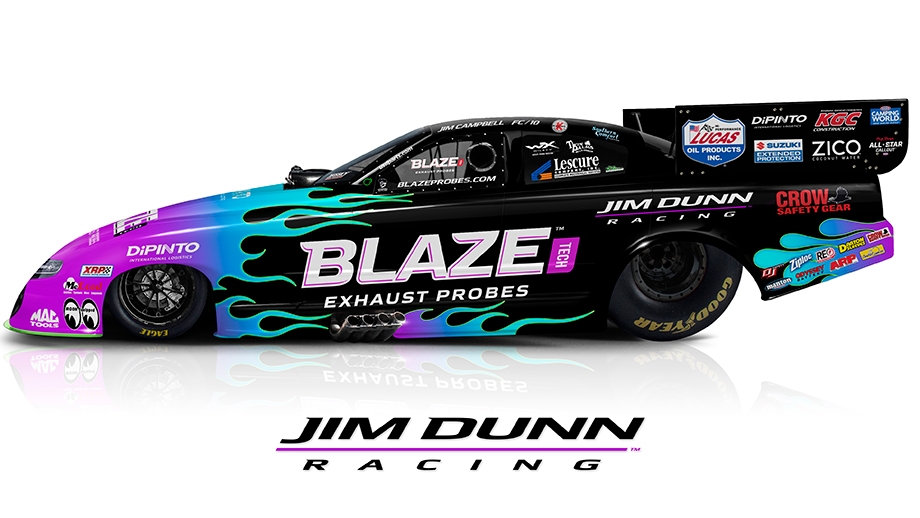