Many full-time NHRA touring drivers have been confused about the NHRA’s new Countdown to the Championship. And many flat-out don’t like it.

If you’re in the Top 10 following the Chevrolet Performance U.S. Nationals near Indianapolis, Indiana in September, you’re locked into the Countdown to the Championship. However, if you miss out on the Top 10, you can still qualify due to a second set of requirements. 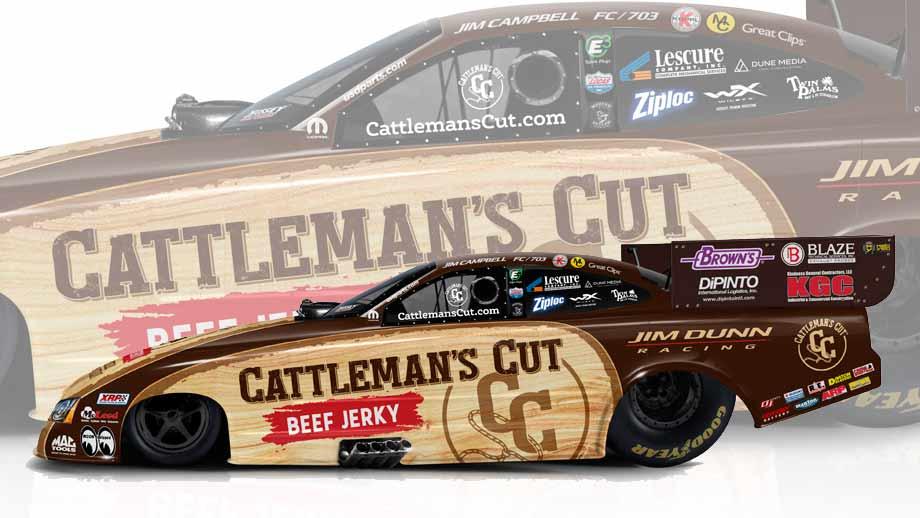 Jim Dunn Racing Funny Car pilot Jim Campbell knows that he’s already locked in to the new Countdown now, as the team plans to make the entire series and make the two passes at each event to qualify.

“I think it’s absolutely awesome,” Campbell said. “The bottom line was, I think, they were trying to be like NASCAR, but we don’t have big enough fields as NASCAR. So that makes it very hard and even NASCAR starts out with a 20-car field [for their playoffs]. It’s only fair to the touring cars that maybe if you’re 11th and you miss the Countdown in the Top 10, you may work your way into the Top 10 [by the end of the year]. It’s great when you try to go out and get sponsors, as well as good with sportsmanship. It gives you more incentive to swing for the fences in those six races.

“I think it’s going to be good for the sport. When the full-time running cars are up there, you know that you’re in the Countdown. I’m excited because in my career, this is the first countdown that I’ll ever make. That’s why it’s exciting for me.”

Campbell said that the NHRA’s new Countdown takes pressure off of the full-time touring cars.

“It’s nice for the team, as it takes a little bit of the pressure off,” he said. “But, at the same time, it’s a catch-22, because we want to be able to fight for it, like we previously did at the U.S. Nationals. All of us knew we had to win in order to get in. I defeated Matt Hagan in round one and Cruz won his – and he was just ahead of me. It’s nice that we know that we’re going to be a part of the playoffs, but at the same time, we want to be in the Top 10 at the start of the playoffs.”

Campbell thinks that the changes were made to help teams bring new sponsors to the table. If teams made the Countdown to the Championship, they could approach a perspective sponsor and that may help them secure a partnership.

“I think that’s the major, major factor of all of this overall,” Campbell said. “If you’re a full-time car, you should be able to fight for the playoffs. I think there’s only about 13 full-time touring Funny Cars, so there’s no reason why they all shouldn’t have the opportunity by the end of the year to be able to make the Top 10.”

Previously, with the old Countdown to the Championship, even if you were on the outside of the Top 10 and caught fire during the Countdown, the team was not allowed to make the Countdown. However, Campbell thinks this will beneficial for all the teams.

“If you think about it in the old times, there were 10 cars,” he said. “Like any other sport, once you lose in the playoffs, you’re eliminated. So what would be the incentives for the team going out there to run? Well, now, you have an incentive. And at the same time, if you did it with the Top 10 cars, let’s say, everybody else said they were not going to run. Well, then you’re only going to see 10 of the fuel cars on both sides. Plus if you had 10 cars in the Countdown, then after the first round, you’ll only have at least five cars and obviously, somebody would get a second-round bye. And that’s not fair to the other drivers in it. Now, it forces everyone to show up after they qualify for it.”

The Cattleman’s Cut Beef Jerky-sponsored team made some changes in the off-season. Campbell will be piloting a new chassis during the 60th annual Lucas Oil NHRA Winternationals presented by ProtectTheHarvest.com.

Also, the team went from a six-disc to a five-disc clutch. The team also changed its fuel system.

“We sat down, as a team, and having Big Jim – who has a lot of knowledge – we decided to go back to a 5-disc clutch vs. the 6-disc clutch,” Campbell said. “We changed some stuff around on the car and we’re still probably going to do short burnouts, so we do not get the clutch hot. That’s really important, especially with the 5-disc. We did struggle last year – and a couple of them were my fault. I had Tommy Johnson Jr. beat in Phoenix and the car got over by the center line and I tapped the 1,000-foot cone. I also red-lighted against J.R. [Todd in another race] and had him beat, so some of those first-round losses, two of them were my fault. When I beat Matt Hagan in St. Louis, I cut a good light against him. I had Shawn Langdon beat until I kicked the blower belt. You just never know what’s going to happen when you stomp on the throttle of one of these things. With these changes, we’re looking to be a factor in all of these races.

“I have a lot of energy. I love being one of the fan favorite drivers that the fans want to talk to, because I enjoy people. I need to make sure that once I’m strapped in that car, my 100% focus is to get this car down the track and cut a good light.”

Correction? You can send an email to our Publisher Anthony Caruso III. He can be reached at publisher@thecapitalsportsreport.com

© 2007-2020 The Capital Sports Report. All rights reserved. All the articles and photos contained on the website are protected by the US Copyright law and may not be re-produced, distributed, transmitted, displayed, published or broadcasted without the prior written permission. The Capital Sports Report and its logo are official trademarks of Anthony Caruso III and Anthony Caruso Enterprises.