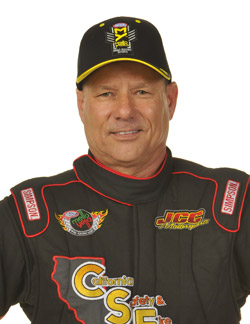 Jim Campbell is about to realize a childhood dream by making his first pass down Auto Club Raceway at Pomona in a Funny Car. Campbell, a retired first responder who operates California Safety & Fire Specialists, will be making his Professional debut behind the wheel of the Dodge Charger Funny Car owned by Chuck and Del Worsham.

“You have certain dreams in life,” said Campbell. “When I was 8 years old, my father was able to put my head over the fence to watch [Don] Prudhomme, [Tom] McEwen, and all those guys. I thought, ‘That would be the coolest thing on the planet.’

“Getting the opportunity and having it went so fast from April when I got my nostalgia license to June when I got my fuel license to February when I’m here running the Winternationals. It’s been a fun and fast ride, no pun intended.”

The expedited time frame from dream to reality was aided by experts in the sport who have taken interest in Campbell’s development as a driver.

“I got started at Frank Hawley’s Drag Racing School, and Frank has been wonderful to me,” said Campbell. “Jack Beckman set everything up, and Jack’s been wonderful. Between them, Chuck and Del Worsham, Jeff Arend, and Cory Lee, everybody has had a hand in getting me where I’m at today.” 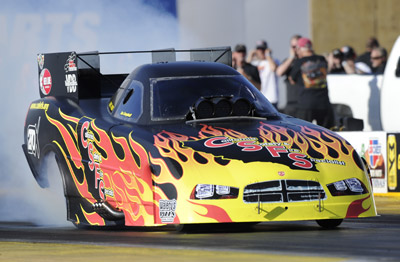 Campbell participated in the NHRA Nitro Spring Training event at Wild Horse Pass Motorsports Park last weekend to get additional seat time before his debut. The main concern was that the race car performed so well during his licensing procedures that they wanted to see how he would perform under less than ideal circumstances in the 10,000-horsepower machine that is, by nature, unpredictable.

“Anytime you can get seat time in one of these things, it can do nothing but get you better,” said Campbell. “Having some adversity on Friday [at the NHRA Nitro Spring Training event] with tire shake and having the clutch lock up and send me sideways made me realize that you don’t get down the track every time perfect. Of course I know that, but I’ve never had it happen to me. Now that I have, I think I’ve gotten those bugs out. The adversity makes you grow.

“We’re going to run Phoenix after this, and we are working on funding to run Las Vegas and a couple other events. Today, I’m running at the start of the first session in the left lane next to Gary Densham. Gary’s been around for years. I’m excited. I feel lucky.”